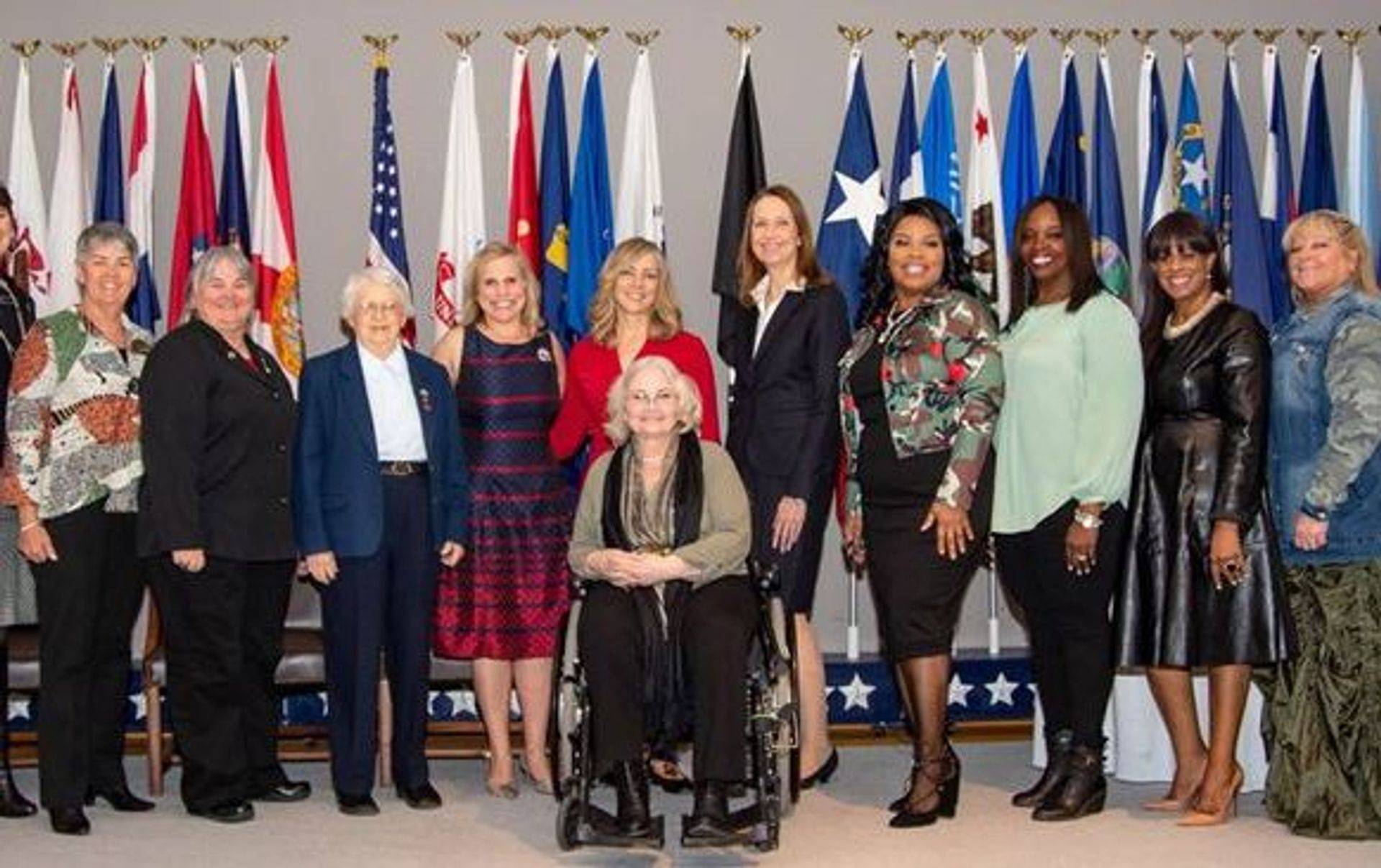 Get email updates on our organization

NAWV. Incorporated  is undeniably the first premier "women  veteran's" organization founded to function as an impetus for healing, educating and empowering women who have served in the armed forces; and have been consistent in being a pioneer and trailblazer for introducing impactful, realistic  and articulate commentary  from  experience in the areas of homelessness, healthcare, clinical and treatment related issues; FISA, MST and related legislation; presenting on major platforms for educating legislators and decision makers on policy and needed legislative matters with much success and many victories to our credit.

We  are now seeking to restructure our board and looking for qualified, professional individuals to help us meet our goals and objectives.
Our mission is to increase the awareness of women veteran's issues by strategically identifying avenues for promoting our causes and strengthening our platform through healing, empowerment and educating women who have served in our armed forces leaving no unmet needs.

Military Families and Dependents
Mentoring and coaching
Housing Counseling Assistance
Cyber Support/Counseling/Peer-to-Peer Support
Social Networking Discussions for healing and empowerment sharing
Resource and Information Services and Support
Health and Wellness Assessment and Referrals
The founder, Cathy Santos, is also on the leading edge for  strategic planning and implementing programs and projects that engage interested and concerned individuals for helping and supporting this population in all areas of their need; and is available for consulting, educating, and empowering others for program development and supporting funding opportunities in language and resources; is a sought after speaker (Pentagon Advisory Committee,  Congressional, Senate , State and  Municipal levels) and advised on issues related to military culture and an expert on women veterans issues at every level of government, civic, clergical and social environments.  Cathy Santos has experience in Public Relations, Marketing and Advertising previously working in this capacity at NBC10; Strategic Planning and Certified Expert in National Security and Nuclear Defense and is a self proclaimed expert strategist for positioning women veterans and interested parties in Program and Project Implementation utilizing a plethora of combined experience, education and history working in this area over 20 years.
Green to Gold is an organization that supports women who are military and are Police Officers, led by Captain Alfeia Devaughn Goodwin; who is also the First Chaplain selected to the Pennsylvania Army National Guard after the Iraq War.
Please support this organization founded on integrity and professionalism for promoting a cause that is now a national agenda; however we believe that peer-to-peer support is paramount for manifesting the outcomes needed in the lives of other women veterans.
Please make a tax-deductible donation to our 501 c3 and Public Charity in any amount by clicking on the "donation" button to the left.
We thank you in advance for your support!

We are pleased with the work that has been done through our advocacy and outreach.  For the past 18 years military sexual assault is an issue that was passionately and aggressively fought through legislation and policies at every government level; Veterans Affairs, Senate and House Subcommittees. We are presently involved in the filing of Case Number CA CV 11-151 MST Class Action Lawsuit, filed on February 15th, 2011 in Federal Court in Virginia.  Susan Burke, LLC law firm and consultants have been aggressive in bringing the lawsuit to the attention to all concerned.  The 15 individuals who are named in the lawsuit include two males.  Please find more information at www.swan.org.

Founder and Executive Director, Cathy Santos gave testimony to the House Committee on Veterans Affairs in 1993.  There she addressed military sexual assault and health care at VA medical centers that resulted in women veterans clinics being instituted in VA hospitals throughout the United States and is archived in the Library of Congress. Biography will shortly of all officers:

NEW We would like to thank Sharon Rice of Wilmington, DE for a generous contribution in the name of "Women Veteran's Causes" - we appreciate her thoughtfulness and kindness to support the work that we do. Feb. 2013 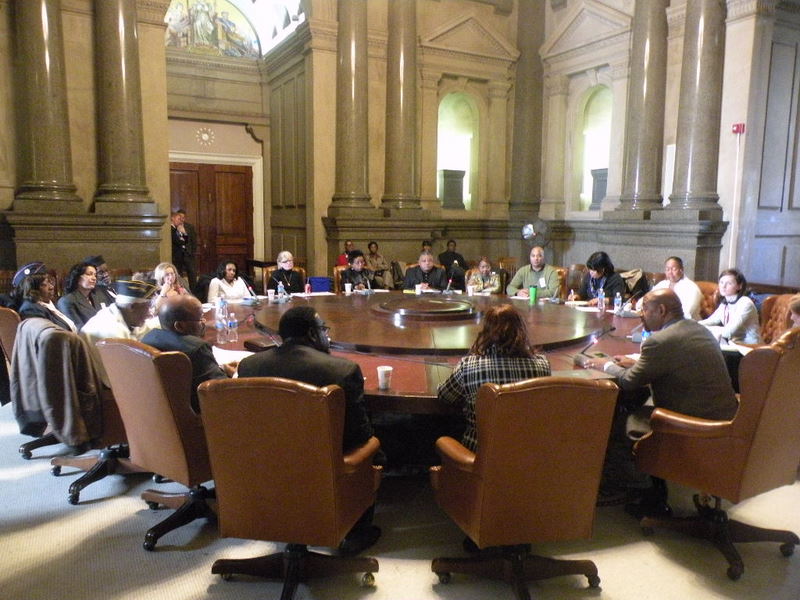 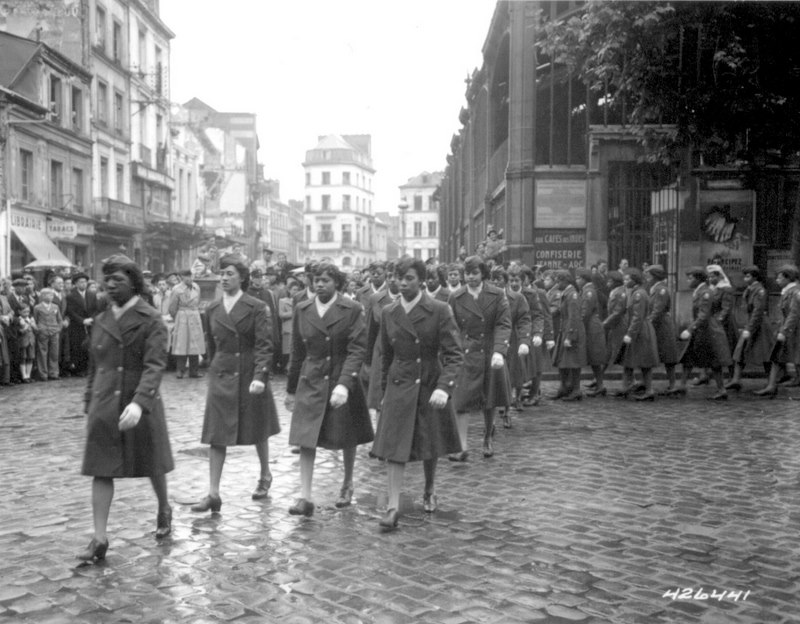 National Alliance of Women Veterans, Incorporated, Articles of Incorporation and By-laws are filed in the State of Pennsylvania Bureau of Corporation in Harrisburg, PA. 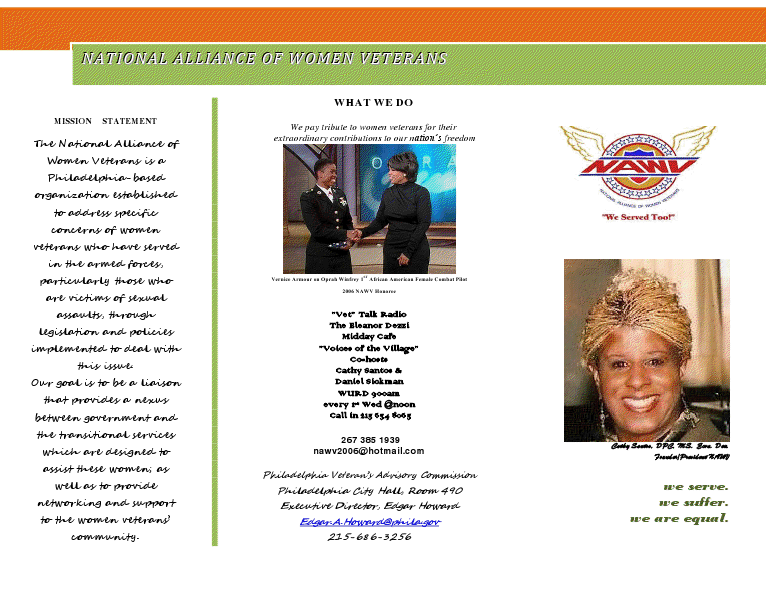 For more information on our organization, please check out our webjournal:

This page is managed and updated by Women Veterans Business Solutions, Inc.